Akshun Man is the product of a world gone mad and corrupt. Born & raised in the ghettos of Montreal, Canada, in a single-mothered family household, he was just like the rest of the kids his age who quickly gave up on school and turned to the street life. Writting his first rhyme at the age of 12, he immediately fell in love with the artform and eventually developped a passion for it. At age 15, he dropped out of school, started selling dope, getting high and living like his idols in the rap game.....in the fast lane. But that eventually landed him 1 year in a juvenile correction center for possession of narcotiks in the attempt to traffic. From there things only got worse. Since his initial arrest in '96, the long arm of the law would not let go of him that easily. Living from spot to spot, and going back in and back out of jail every other month, had Akshun's life spiraling downwards. But like they say,"at the bottom, the only way to go is up". In the summer of 2001, Akshun decided to travel to Los Angeles,California,for 2 weeks to visit his sister who was on about to give birth. On his return he decided that he would work towards making a move out there within the following year. Back on the streets,he hustled and saved every penny he earned 2 get that plane ticket money up. And as soon as he did,he was gone. Akshun stayed in L.A. developing his skills, making contacts and building bridges, for about almost a year. But the more he stayed,the more he seen the hidden, ugly and superficial face of L.A. Despite the "California Love",Akshun found himself surrounded with people not interested in his success,but cut-throat sharks who were only concerned about using him to their advantage.But as the saying goes "you cannot pimp a pimp", Akshun got back to MTL to formulate a new plan.Since,Akshun Man has been doing shows,has featured on countless mixtapes/albums, has a range of self-produced/directed videos,and dropped a mixtape entitled "America's Most Wanted" (available online). he has also took the time to start his label, his brand, production, publishing and distribution companies (BloodFire Recordz,Thugminded Ent., Akshun Publishing) which is set to be launched in 2012.Currently working on his album, he is also looking for fresh new talent to sign to his label as there is still a couple of spots available on his roster. Akshun is the modern day superhero that'll fight to the death against injustice everywhere. But at the end of the day, words will never be enough to describe him...Akshun speaks louder than words... 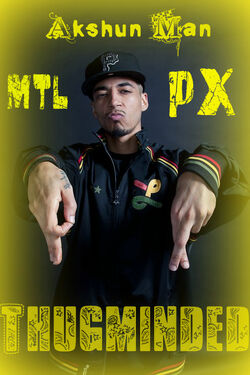 Retrieved from "https://hiphopdatabase.fandom.com/wiki/Akshun_Man_(rapper)?oldid=52285"
Community content is available under CC-BY-SA unless otherwise noted.